Southern Rainbow Skinks are busy little lizards that commonly take up residence in urban and rural gardens. Providing ground-hugging vegetation and a cat-free environment appears to be all these cute little reptiles require for their home range.
Peeping out from a ground cover of native violets 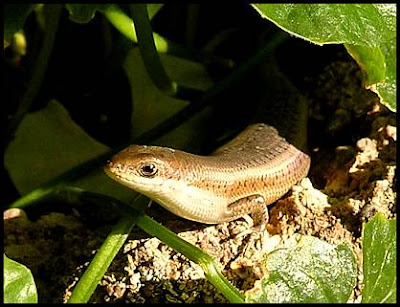 The Southern Rainbow Skink, Carlia tetradactyla, belongs to genus Carlia comprising 24 described Australian species, which are referred to as Four-fingered or Rainbow Skinks.
Habits and habitat

The range of the Southern Rainbow Skink extends from Benalla in northern Victoria, along western slopes of the Great Dividing Range to the Darling Downs in south-eastern Queensland.

Although their natural habitat is open dry forest, particularly those with tussock-dominated ground cover, they are very much at home in gardens with sufficient ground cover. 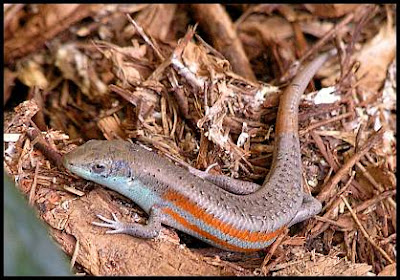 I have Southern Rainbow Skinks living and breeding amongst ferns and violets, herbs and ground-hugging natives. However, since a young Eastern Water Dragon, Physignathus lesueurii, has made a home of my fern garden, the skinks have vacated the fern garden in favour of other leafy habitats around my yard.

They are active, sun-loving lizards, and forage amongst mulch and leaf litter, feeding on insects, spiders and other invertebrates. Being terrestrial (ground dwelling), they rarely climb, but take advantage of rocks and other structures as viewing posts.

All Carlia species have four fingers and five toes, unlike other skink genera which have five digits on each limb.

A juvenile, 60mm total length, in my garden 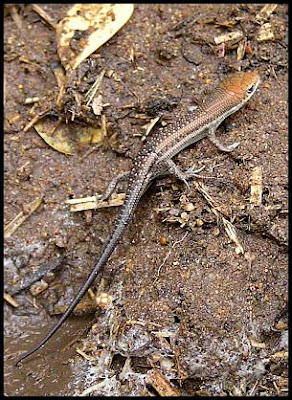 Lizards are usually measured from snout to vent (SVL). Adult Southern Rainbow Skinks are about 65mm (SVL) and up to about 150mm including tail. They have a thin whippy tail, and can often be seen waving the tail in curved motions in the air. I am unsure if there is a reason for this tail-wagging.

Breeding males take on bright orange lateral stripes and blue-green neck colouration, making a handsome sight from October to May. Females lay parchment-shelled eggs (paper-like) in a secluded spot during the warmer months.

A youngster taking cover under a leaf 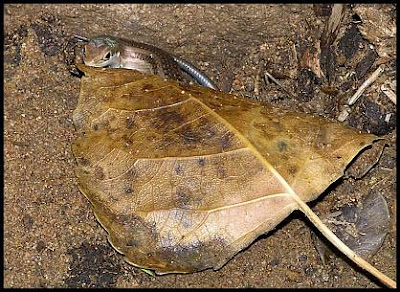 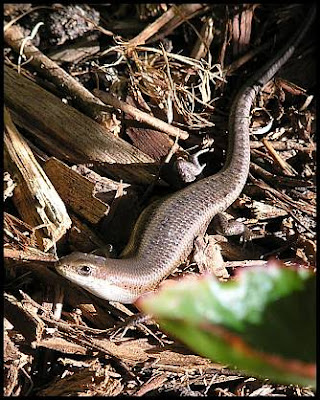 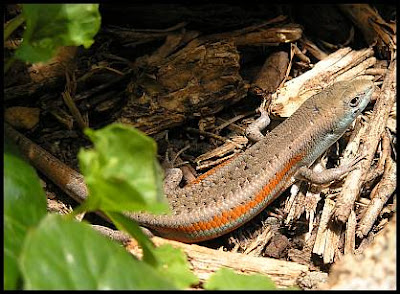 These cute little skinks scurry around my gardens chasing insects and each other. Although they are secretive in their habits, they can be watched at length by a still and patient observer. Create a suitable habitat and they will move in. Enjoy them.
Posted by Gaye at 8:20 am

Beautiful skink you have there Gaye, not to mention cooperative too. My small skinks do not like being exposed and move quickly between vegetation so I rarely get an opportunity to take their photo.

When the skinks lived in the fern garden under the cover of my back porch, I was able to sit and watch them go about their lives with ease, but in other gardens around my yard, it is harder to catch more than a glimpse at times.

The two juveniles that I photographed were not as careful as they should have been, and I took advantage of the situation for a few quick photos.

There are a couple of little skinks living in the space that has opened up between the concrete floor of the porch and the earth underneath (due to the nature of the black clay soil here, combined with drought). They often dart up on to the back porch for a look-see. Delightful little critters.

Hi Gaye,
found your blog while searching about skinks. I think I might have an adult rainbow skink (or two not sure yet) resident in my kitchen. I haven't looked closely enough to know for sure but I have seen a lot of smaller skinks in my Balmain garden that look like your picture of a juvenile.
I have tried to catch the skink in the kitchen because I thought it might do better outside but it is so quick and has a few hiding places like the back of the fridge. Now I'm thinking of putting some meal worms in a saucer for the skink. Do you think this would be okay?
Thanks, and I enjoyed your blog.

you are correct in assuming that your kitchen skinks would do better outside. If they continue to live inside, I would presume they would have a limited food source and start to consume 'human' food which will not be good for them in the longterm.

Now, how to get them outside? Yes, they are extremely quick, and catching them by hand might also result in them dropping their tails.

I would suggest getting one of those fine-net fish-scoops with a long handle (from a pet shop). You could entice them out from under the fridge by offering them a small live insect, and then lie in waiting with the scoop - sounds like my sort of fun !!

If you had access to a live rodent trap (perspex barrel-type construction with funnel entrance) this could also do the trick baited with a few tasty small insects.

It is such a satisfying feeling to have happy, healthy wildlife living in my backyard, that I can relate to your enthusiasm for the wellbeing of the lizards. Good luck with the relocation, and I would be very interested in the results and successful methods.

Dear Gaye,
I'm afraid that against your more sensible suggestion I've gained a pet.
The skink in my kitchen (which I now believe is a rainbow skink) is still there. I honestly tried to catch "her" (see below) but couldn't. I thought maybe she wasn't getting enough to eat so I bought some meal worms (which turned out to be only meal worm beetles). I placed them on a lid in the kitchen on their backs (the poor little things) and they kept disappearing. One day I found the skink next to the lid with beetles gone. Only circumstantial evidence I know but...
Well one day I placed a beetle and waited. Well the skink came out from behind a cupboard and quickly ran to the beetle and grabbed it in her mouth and ran again for cover. She always takes the meal to eat in the safety of cover. Now, if I'm sitting in the kitchen and I see her and put a beetle on the floor she will come straight for it.
I know this is interfering with the natural order but at least I think she might still go outside at night. She has become a little tame but hasn't lost her natural instinct of avoiding me if I get too close. I'm sure she can get out and she knows all the hiding places.
regards,
Neil
PS "Her" name is Daphne, named by a friends daughter. .... and I promise I wont feed any other garden creatures.

thank you so much for giving me an update on your skink, I laughed out loud when I read about the beetles. And "Daphne" is such a beaut name. I have another lizard that has moved into my backyard - a Jacky Dragon, I think it is a female, and I will have to think of a name for her.

I can relate to the warm feeling of being able to offer a resident lizard a helping hand, as I will admit to offering my resident Water Dragon "Jacky" a live cockroach or worm on the odd occasion that I pluck a live one from the garden.

I am trying to keep my distance so as not to "humanise" him too much, so that when he leaves to find a lady lizard, he is not too familiar with people - all humans are not as friendly to lizards as I have shown him I can be, and some have nasty cats and dogs that might shorten his life in a most dreadful way.

I gave my grandkids an iceblock and they sat on the grass about 10feet from Jacky watching him, and Jacky boldly came up to the kids and picked off the flies that were attracted to the sticky kids. It was a joy to watch, and thrilled the kids, but I have discouraged such activity since, concerned about the safety of the lizard.

I'd be very happy to receive any more updates that you care to share. I have become very fond of all my lizards.

i just got a rainbow skink yesterday and he doesent seem to be likeing his habbitat. he has lots of sand to dig in and has many peices of wood for him to be comfortable with but he just doesent seem to be happy. do u think he is just simply scared or something else?

I am sorry that I don't know anything about keeping reptiles as captive pets.

You haven't mentioned where you live, but lizards will be very inactive, or in hibernation during the cooler months, so perhaps your skink just wants to be left alone to rest out the winter.

I had an Eastern Water Dragon living in my garden on my back patio, and he found a safe place to hibernate (under the lid of the barbecue) and occasionally came out to sun himself on warm winter days.

Make sure your lizard has some hidey holes to crawl into to hide, and you might not see much of him in the winter.

I'm sorry I can not be of more help.

Email me here
View my profile