#18 A mantid out of its territory

Praying mantids are secretive insects of the garden, adopting a motionless stick-like stance to blend into their surroundings if disturbed. They can be distinguished from grasshoppers and stick insects by their characteristic way of standing with forelegs held together as if praying.
Extremely mobile triangular head and segmented antennae 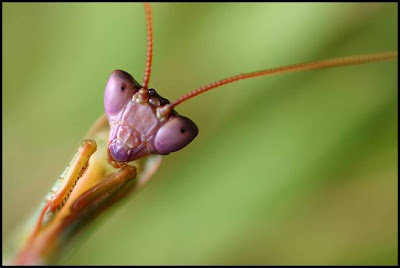 I found Orthodera gunnii, previously known as Orthodera marginata, from family Mantidae, in my garden in February of 2007. According to both The Australian Museum and CSIRO, who identified the mantid, the Hunter Valley is outside of its expected range.
It is usually found in New South Wales (Bulloo River basin, Lake Eyre Basin, Murray-Darling basin), Northern Territory (Lake Eyre Basin, N Gulf, W Plateau), Queensland (Bulloo River basin, Lake Eyre Basin, Murray-Darling basin, N Gulf, NE coastal), South Australia (Lake Eyre Basin, S Gulfs, W Plateau), Tasmania, Western Australia (NW coastal, SW coastal, W Plateau).
Most mantids are known as clumsy fliers, but this species is known to fly substancial distances, so it is not surprising to find it in the Hunter Valley, especially during times of drought.
Temporarily caught in a spider's web at night 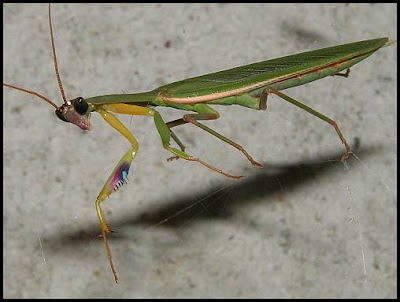 Orthodera gunnii closely resembles the more common Othodera ministralis, the Garden or Green Praying Mantid. It is similar in size, colour and habits, with the most noticable difference being the face colouration which is green in the common Garden Mantid and mauve in Orthodera gunnii.
A mantid scurries away as I attempt to photograph it 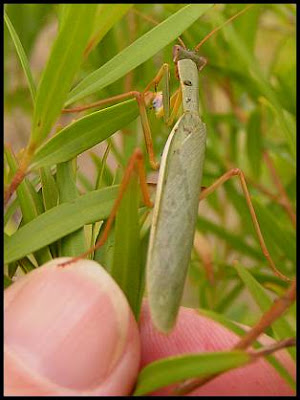 Praying mantids are carnivorous as both adults and nymphs and eat insects, which they seize with their spiked forelegs. They have a sit-and-wait hunting strategy.

Breeding habits
Female mantids have the bizarre habit of eating the male during or after mating. The insect world can be a dangerous place.
The female lays her eggs in a foamy substance that hardens into a distinctive case, called an ootheca. These egg sacs can be attached to branches, tree trunks, logs, fences and even buildings. Below is an image of a mantid ootheca and hatchling, although it does not belong to Orthodera gunnii. I have included this picture to illustrate the general appearance of a mantid ootheca.
Mantid ootheca (egg sac) and hatchling 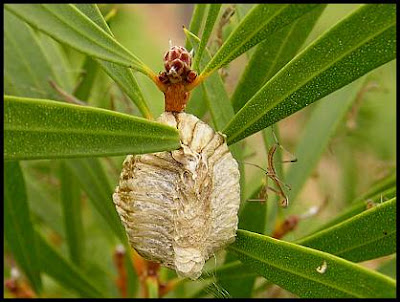 The hatchlings, (nymphs), emerge from the ootheca resembling small wingless adults and develop through a series of stages (instars), moulting several times before reaching maturity. Mantids are good examples of insects that have gradual metamorphosis.

As they grow, the wings develop. With each moult the wing buds increase in size. When the wings are fully developed, the mantid has become an adult. There are exceptions, however, where some adults have stunted wings or no wings at all. When young, they will eat their siblings if food is scarce. 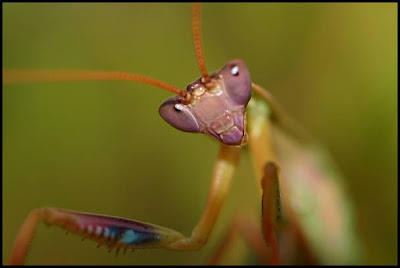 Underside view, while temporarily caught in a web 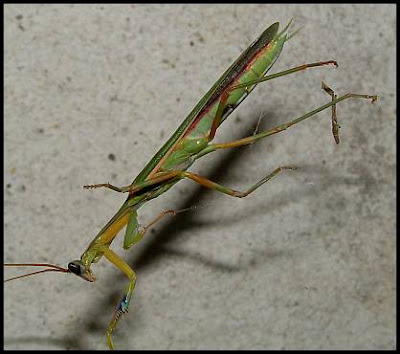 This has been a difficult project to research as it appears to be a little-studied species. It would make an interesting exercise to record sightings from locations around the country, so if readers have observed Orthodera gunnii in their district, I would love to hear about it.
Appearing to only have two sets of legs, the third pair are typically tucked under the head against its thorax 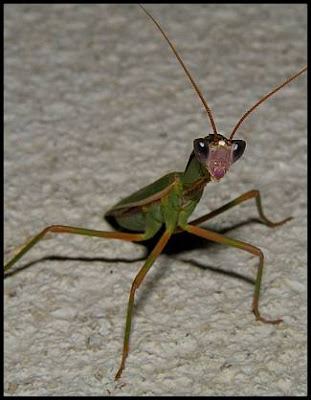 I found this attractive and fascinating mantid on three separate days in my backyard, and was able to observe it at length. They depend upon camouflage as defence against spiders, bats and birds. Although their large staring eyes give them a rather fearsome appearance, they are of no threat and rid the garden of many insects. If you have them in your garden, you are fortunate.
Posted by Gaye at 8:20 am

Wow, that mantid certainly has a huge toleration range from the driest and hottest parts of central Australia to the other extreme of Tasmania. Great photos and a nice story.

I thought the same about the inclusion of Tasmania in its range, too, Jack. That information came from the CSIRO. The Australian Museum is less convinced that it has been found in Tasmania, however.

CSIRO say "It doesn't seem to be a well documented species and our resources seem to be exhausted".

And Australian Museum say "confusion won’t be cleared up until the genus is properly revised".

Thank you for your response.

Glad you finally found an ID on this guy. It makes it really hard when the books get it wrong, but it is good of the CSIRO to help out. I am sure they are happy to get the record.

yes, this has been a difficult project. Even the Australian Museum says that this species has been wrongly identified on internet sites, so there was nowhere to search for additional details with any confidence.

I am hoping if readers find this species in their area, that they will let me know. It would be great to build up a list of locations of sightings.

Nice to hear from you.

Stunning photography, Gaye, congratulations.
It is good that you get to link up with the experts at CSIRO. I have found their Orchid people to be very approachable, once they realise that you are a serious observer.
Denis

hello Denis, and thank you.

With both the Australian Museum and CSIRO agreeing on the identity of the mantid, I was quite confident to name it. This is the first time I have approached CSIRO for assistance, and they were also very helpful.

I have, however, contacted the Australian Museum a few times when I have been seeking expert opinions, and they have also been pleased to help. The public is fortunate to have such resources available.

I love the colour! I'd never know to look if I hadn't seen the pics. Very cool.

that's what the sharing of nature observations is all about, hey - allerting others to the beauty and wonder that is literally under our feet.

I'm pleased you enjoyed my mantid encounter - he/she is a beauty :)

i am from romania, i just found this insect in my yard.
finaly i know what it is.

hello to the reader from Romania.

I am pleased my observations were of assistance to you. Thank you very much for taking the time to leave a comment.

Email me here
View my profile